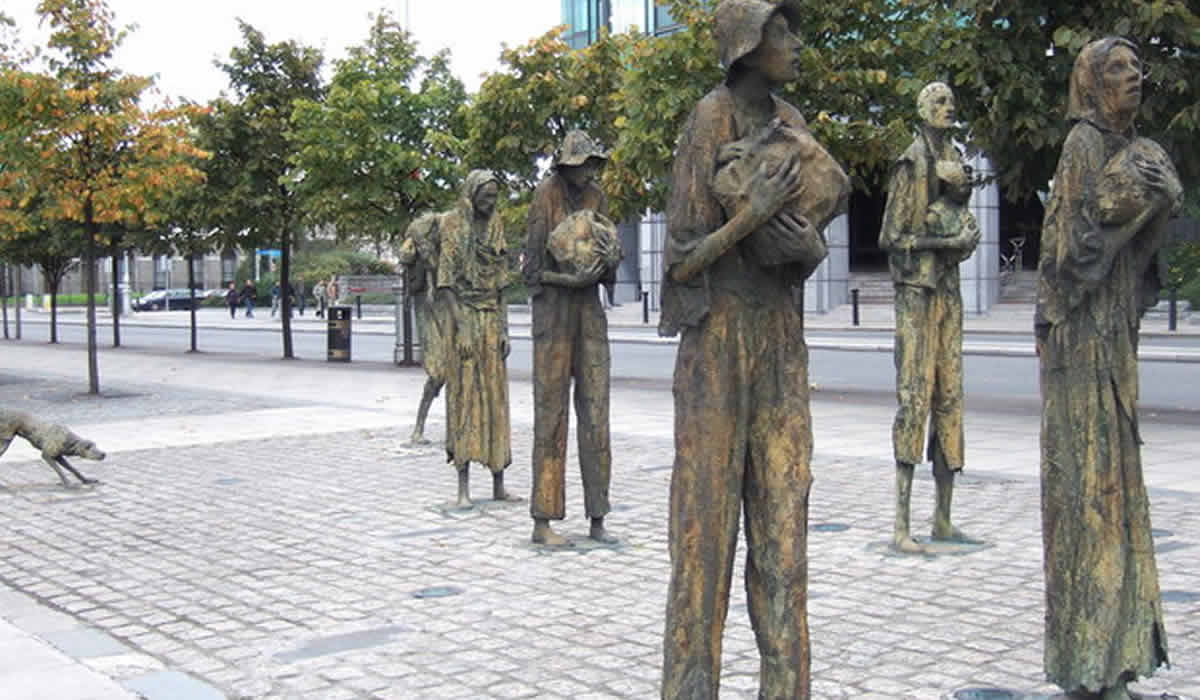 Politics, religion and… potatoes? Understand how these three elements had an impact on the formation of Irish society. Anyone visiting Ireland today will see some sculptures and monuments in honor of the victims of the 19th century famine. This was one of the most important chapters in Irish history and not only because of the tragedy itself, but because of a series of factors that still intrigue historians and researchers.

Between the years 1845 and 1852, a series of troubles in Ireland reduced its population by about 25%. During this period, a series of illnesses and a crisis in access to food caused a mass departure from Ireland. An estimated one million people died of starvation and over a million left the country.

How it all began?

According to Irish historians, it all started in the early 19th century, when the country was still ruled by the United Kingdom. A mitigating social difference began to take place on the Emerald Isle.

Thus, most of the Irish population belonged to the lowest social class, especially Catholics. On the other hand, the Protestants, despite being fewer in number, enjoyed most of the lands of Ireland.

This happened because the United Kingdom did not accept Catholic education and created increasingly heavy laws and taxes. Thus, a certain religious feud aggravated the situation.

In addition, in a short time, Ireland began to pay a very high tax burden to the British. As a result, most of the country’s food production had to be exported to the United Kingdom. Thus, the diet of the Irish became almost exclusively of potatoes.

Thus, what the Irish feared most began to happen with some frequency. The potato crop began to “fail”, due to some pests, leaving the people practically without food.

However, the ultimate blow came in the 1944 season when a plague, called Phytophthora infestans, struck Europe. Although it is not known for sure how this plague reached the Old Continent, the most accepted theories are that they were taken on cargo ships from the United States or Peru.

What is certain is that this plague aggravated the situation in Ireland, which went on to experience a severe famine, culminating in the death of a million people.

In addition to hunger itself, several diseases aggravated the situation. With accentuated poverty, the population became more susceptible to diseases. In addition, the social movements themselves, of Irish people seeking new lands, made the diseases spread more easily.

The end of the crisis

One of the best known actions was the donation of food from the Ottoman Empire in 1845 and the importation of Indian corn. However, as this grain was hard, the Irish did not know how to process it and its consumption only created more problems.

The crisis was only considered overcome because the potato crop itself recovered between 1851 and 1852.

Even today, the population decline has not been recovered. Ireland is the only country in Europe, and possibly the world, that has a smaller population today than it did in 1840.

The potato crisis is widely revered in Ireland. Even in New York, in the United States, there is a memorial to the Irish famine.

Even today, the subject inspires Irish people, such as Bob Geldof (founder of Live Aid) and Bono (U2), to fight hunger in the world.

Therefore, when you are in Ireland, when you see one of the monuments in honor of the victims of the great famine, you already know that it is a crisis generated by a plague in the potato crop and aggravated by the political inefficiency of the time, mainly, of leaders from the United Kingdom, who ignored the situation in Ireland.